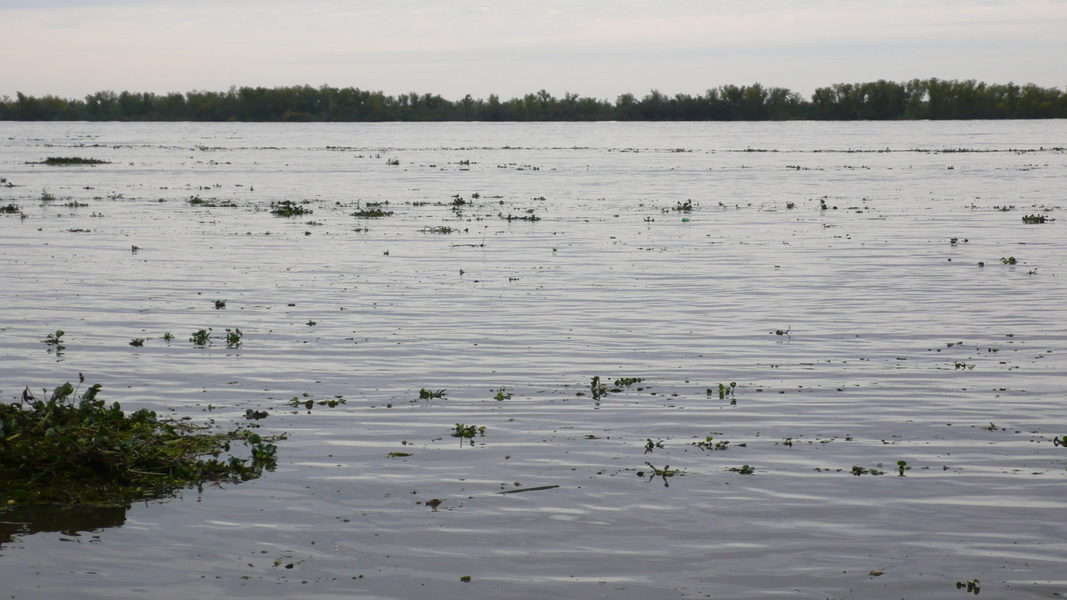 by Brian Holmes
We are on the banks of the Parana River, in Rosario, “the Chicago of Argentina” – one of the biggest grain-exporting ports in the world. Behind us is a wealthy metropolis with towers reaching into the sky, then dead flat fields of GMO soybeans that stretch across the Pampa and beyond, into the foothills of the Andes. In front of us is the river itself, wide and brown like the Mississippi but entirely different, because it is not integrally dammed, diked, channeled and transformed into a simple highway for barges laden with grain, sand, stone, coal and petrochemicals. Instead, the Parana retains a vast delta, 200 miles long and as much as 50 miles wide, full of densely vegetated islands separated and joined by braided channels.
The Delta is a tremendous bioregion whose outline is clearly visible from the air, while its labyrinthine inner landscape is known only to those who live there. Between the monocrop on land and the rolling flood of the river, we are camped out in three enormous and shadowy brick tunnels – an underground exhibition space that used to be a railroad depot on the river docks, filled with dusty grain on its way to the sea. Right now this place is bursting with art. The show is called The Earth Will Not Abide. The context is called Collaborative Territories.

The Earth Will Not Abide is an exhibition of critical geography that aims to explore the symbiotic community of the soil and its destinies in the age of globalized industrial agriculture. Collaborative Territories is an initiative that responds to the threat of total environmental control by engaging in expressive solidarities with the island-dwellers of the Delta. The meeting of the two is hardly an accident, because the central goal of The Earth Will Not Abide was to explore the changes in land use brought on by GMO agriculture plus the new China market, which together have sparked huge expansions of the grain-growing frontier, both in North and in South America.

The video entitled “A Great Green Desert,” by Ryan Griffis and Sarah Ross, compares scenes from monocrop fields in Illnois and Brazil, in such a way that you often cannot tell the difference. That’s because the underlying processes of colonization are so inherently similar. The wall display and web-based map/archive, “Open Veins of the Americas,” by myself and Alejandro Meitin, explores the “Living Rivers” of the Mississippi and Parana watersheds, which are both major industrial river basins exporting grain. The theme of the symbiotic soil community and its relation to industrial farming is developed in the soil chromatography by Claire Pentecost, and in a somewhat different way, in the delirious “Cornstitution” translated from the language of the Maize by Sarah Lewison and duskin drum. Finally, the conflict between traditional peasant life and financially driven modernization processes is raised, not in South America, but instead in the soy-importing country of China. Sarah Lewison’s three-channel video “Naxilandia” deals with everyday peasant resistance to modernization in the Lashihai Valley in the Chinese province of Kunming.

The Argentinean edition of the show is quite different from the three previous versions that were held at the University of Illinois at Chicago, at Southern Illinois University in Carbondale, and at the Pacific Northwest College of Art in Portland. The difference is simple to explain: we sent out a powerful message from the North, and we got a transformative response from the South, fulfilling and exceeding the potential spaces left vacant in our work. Graciela Carnevale and Alejandro Meitin organized, not only the exhibition in Rosario, but much more: five “campaigns” that sent artists, activist researchers and local inhabitants out into the island territories of the Delta, and then subsequently brought the same heterogeneous mix of people together again to elaborate aesthetic expressions of their experiments in collective perception. The formalization process of these experiences was particularly interesting, socially, geographically, ecologically – a real intensive mix that delves deep into each particular territory. The results of the five campaigns were combined with works by Eduardo Molinari and Santiago Fredes, as well as small retrospective sections devoted to multiple antecedents, including the CuencasLab program in 2015 which Sarah Lewison and I were fortunate enough to join along with Critical Art Ensemble (eternal thanks to CAE). Finally I should add that all this was correlated with support for a very concrete objective endorsed by everyone participating, namely the passage of a “Wetlands Law” that would provide a conservation framework for riverine environments in Argentina, including their human dwellers and not just a fantasy of pristine nature.

The closed two-day meeting that followed the opening was an organizational interweave of around forty people, involving NGO representatives, environmentalists, local political figures, artists, island-dwellers, people chased off their land by gated communities and a project on the “Feminist River” that comes straight out of a rising national social movement (however all but one of them chose not to come to the event). In contemporary art circles there used to be a lot of value placed what Felix Guattari called “transversality,” which referred to social and political initiatives mixing people of different outlooks, origins, languages, social classes, skin colors and genders, in such a way that the differences resonate far beyond the statistical sum of diverse parts. These kinds of things are never smooth or easy, but I am glad to be doing them again.

A key part of this work is an interactive map, made with open-source and community-oriented mapping technology supplied by a Seattle-based group called Mapseed (https://mapseed.org). There’s something very beautiful going on here, because Mapseed is considered by its inventors to be a “spiritual successor” to the Argentinean project “Que pasa Riachuelo?” – a participative “social monitoring map” for the cleanup of the Riachuelo river, launched in 2010 by the group M7red. As it turns out, that same group also carried out one of the campaigns in Collaborative Territories. With the return of the Seattle-based mapping project to the Argentinean context that inspired it, the loop is looped, so that origins are also futures. To see Mapseed’s work in action, and to get a sense of the Delta territory as expressed by those who love it, check out https://mapa.casariolab.art. Here’s the wall text we wrote to describe the stakes of this exhibition and larger project into which it is now inserted:

“Convoking multiple perspectives on the Parana River Delta, The Earth Will Not Abide asks a question at the scale of the Western hemisphere: How to protect vital ecosystems against the devastation of extractive agriculture? How to escape the standardizing process that is transforming landscapes throughout the Americas?

“The exhibition in Rosario comes out of a collaboration with artists from in and around Chicago: two cities at the center of the global grain trade, each surrounded by a ‘great green desert.’ In the Mississippi basin, as in the La Plata watershed, endless fields of genetically modified crops are causing increasing levels of environmental damage while contributing significantly to climate change. The works presented in the final room of the exhibition draw striking parallels between North and South, showing how living soil is reduced to a simple substrate for chemical products. Even in China, the largest of the soy-importing countries, the transformation of the territory mixes modernization and threat: two sides of the same coin, whose economic laws regulate our planet’s destiny.

“Faced with this critical assessment, an emerging movement composed of artists, researchers and inhabitants of the Rio de la Plata Delta have begun ‘learning from the flood,’ letting themselves be guided by the shape-shifting territory of the wetlands. Five groups, each mixing different horizons, set out for experiments in collective perception along the river’s braided channels, from Rosario and Victoria near the Delta’s northern tip, to Isla Paulino on the south bank of the estuary. Using an interactive map to leave traces of their passage, and adding their new work to previous iterations of the Delta project, these groups translate their perceptions into visual and acoustic forms, creating a flourishing ‘culture diversity’ in tune with the amazing biodiversity of the riverine environment.

“How to move from away the current pattern of agrochemical exploitation, toward a new coexistence with nature? The expressions gathered in this exhibition give a foretaste of future social conflicts, when humans and non-humans will come together to resist the forces that are denying everyone’s right to residence on Earth.”

For further information about The Earth Will Not Abide, see http://regionalrelationships.org/tewna

For a look into the projects organized by Alejandro Meitin and a wide range of collaborators, see https://www.casariolab.art

Finally, if you have not checked out Rios Vivos/Living Rivers, you can see that at http://ecotopia.today/riosvivos/mapa.html (and don’t forget to hit the “North” button if you want some English).

One thought on “The Earth Will Not Abide / Collaborative Territories”